What Is A Float Play Or Floating In Poker

The float play should become a part of any poker player’s arsenal as their understanding of the game evolves from the simple thinking of a beginner to the more advanced tactics of a higher level player. When used regularly and executed properly, floating can add significantly to the chips you find in front of you at the poker table.

What Does Floating Mean?

The most basic explanation of floating is to call a bet on one street—usually the flop—when you are in position, with the intention of bluffing on the next street to steal the pot from your opponent.

A player might decide to float with a weak hand, a drawing hand, or with nothing at all. The point is not to make a hand or see the showdown. This play is used as a defense against a continuation bet and meant to take the pot without resistance.

What You Should Know About Your Opponent

Floating is generally not something you want to do against a player that you know absolutely nothing about. Before attempting to float a continuation bet you should have at least a basic idea of how your opponent plays when he is the preflop aggressor and finds himself in a heads-up pot out of position. Here are a few things you should consider.

How Often Does Your Opponent Make A Continuation Bet?

Does your opponent only bet on flops where he has connected or does he bet on almost every flop no matter what cards come out?

How Likely Is Continued Aggression On Remaining Streets?

Does your opponent generally make a continuation bet on the flop and shut down on the turn if he missed, or will he continue to try to push you off the pot all the way to the river?

Does Your Opponent Check To Induce Bets?

Some opponents like to “play possum” and check in order to induce a bet so they can then raise. Have you seen your opponent use this tactic when they are out of position with a strong hand, or maybe as a bluff?

How to Float the Flop

To successfully float the flop you should first make sure that the following points are true: 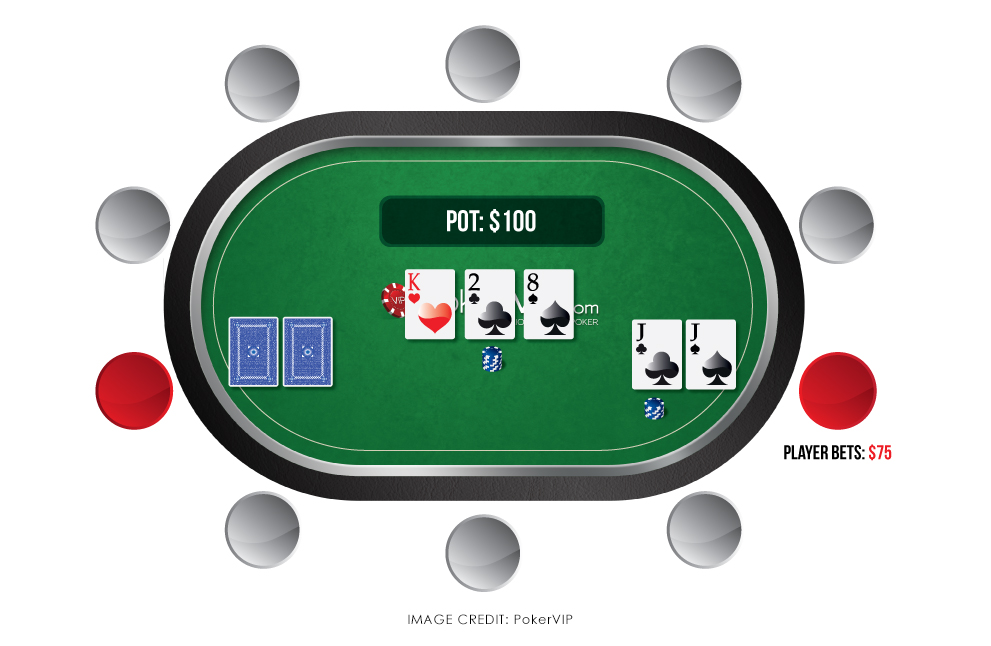 A spot where you might consider floating the flop would be against a tight opponent, who opened from middle position preflop—where his range starts to loosen—on a flop consisting of all low cards.

For example, let’s say the flop comes out 9h, 2c, 4s, and your opponent makes what you perceive to be a weak, half-pot bet. He may have opened preflop with aces or kings, but he’s also very likely to open with hands like AK, KQ, AJ, AQ, and others. Most of his range doesn’t connect at all with the flop.

If you know that this opponent tends to shut down when he doesn’t have a solid pair or a good draw, it’s the perfect time to float the flop. You can call his continuation bet and wait to see what he does on the turn. If he checks, showing more weakness, a bet of two-thirds to three-quarters the size of the pot will most likely get the fold you’re looking for.

If instead, your generally weak opponent continues his aggression and bets out again on the turn, you can fold confidently, knowing that he most likely has an overpair or something else that you weren’t expecting.

Notice that at no point during the above example did we even look at our own cards. This play depends more on the opponent that you are up against than the cards you actually hold. You may be more inclined to make a move like this, though, if the signs look positive and you also have something like high pair or a good draw to give you some equity as backup if your opponent calls.

Check this article: How to choose proper bet size

How to Float the Turn

Floating the turn follows the same basic concept except that you would call continuation bets on both the flop and the turn with the intention of stealing the pot on the river.

Although the idea is the same, floating the turn is considered to be a higher level advanced tactic. To be successful, it requires much more specific knowledge about your opponent. Of course, since you are actually floating bets on two streets, a float play on the turn means that you’re putting more of your own money at risk, too.

It’s safe to say that in almost all cases floating the turn is not an advisable play to make. If you were going to try to pull off this play, however, you would need to be more than fairly sure that your opponent will show aggression on both the flop and turn with just about any two cards and shut down on the river when his hand hasn’t improved.

Along the way, you would also need to judge whether or not the flop and turn cards could be helping him to improve with his most likely preflop opening range. Taking things just one street further makes it a lot more complicated.

The Best Situations To Use The Float Play

As with everything else in poker, and indeed most gambling games, the more information you have at the time you lay your money on the table, the better the results you are likely to see.

All of the following factors can help you to judge whether or not floating a bet might be a good play in a particular situation. It’s not necessary that every point is true in every situation, but you will certainly tend to have more success when more of them are, in fact, true. Here’s what you should look for before deciding to utilize the float play in any poker game:

The Worst Situations to Use the Float Play

And finally, of course, there are also some situations where an attempt to employ the float play will most likely just burn some extra holes in your bankroll. A few of those bad situations might be:

Is the float play a part of your arsenal at the poker table? Have you been able to pull it off or do you struggle to find the right situations? Leave your opinion in the comments. I read everything and try to answer everyone.

If you’re looking to put your poker knowledge to good use, check out the PKC Poker real-money poker app. They’re a USA friendly online poker room and you just might catch someone from the Enhance Your Edge crew at the tables!