Fast forward to 2007 — I was 17, I had gotten my driver’s license and purchased a used Mazda 6. It was silver in color, with a hatchback trunk. I loved that car. It had a Bose sound system with a 9-inch sub that packed a tight punch. It was quick too, sporting 220 horsepower, if I remember correctly. I’m not a car guy by any means, I don’t know jack about engines, I can’t drive a stick, but if it has nice features and it’s affordable then it’s for me.

By this point in time, I had learned to deal — but I was awful at it. Everybody has to start somewhere, and for me it was at Spades, a popular club in Long Island, New York. I was strictly a tournament dealer and was not allowed to deal the cash games. I wasn’t good enough, yet. I needed practice to get better, and I got the hours in by dealing their tournaments three times a week.

Going back several months, I had found a website that offered a “poker dealer school” video DVD training course. I made the purchase and completed the course. 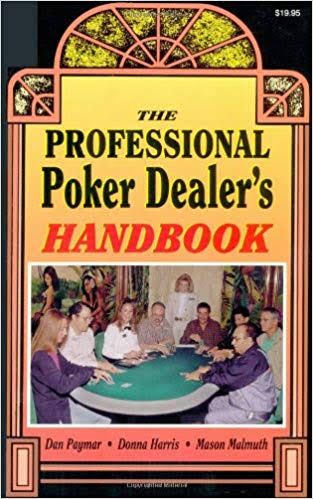 I also purchased a book titled, “The Professional Poker Dealer’s Handbook”. Really, it was more like a 247 page manual. It had a plethora of information in it. It seemed to cover just about everything you needed to know about being a professional poker dealer. I read the entire thing, cover to cover. It was an incredibly useful tool. If you pull it up on Amazon and take look inside, you’ll see why. It is most certainly, without a doubt, the professional poker dealer’s handbook. It’s like a bible for dealing, although I’m sure it’s probably outdated by now.

The DVD video course wasn’t quite like the book. It focused more on the mechanics of poker dealing — the shuffle, pitching cards, cutting chips. It had some content in there about side pots, raking, pot-limit pot calculation, chopping pots, and other general procedures.

I was glad that I bought both of them. The video course offered what the book didn’t — visual demonstration of the mechanics required to pitch cards, which would be impossible to learn from the written word.

I purchased a poker table, Paulson chips, KEM cards, and would practice dealing on a daily basis. I would routinely set up 9 stacks of chips around my table, deal out the entire deck by pitching cards one-by-one to each stack, and repeatedly practice this over and over until I could smoothly pitch cards accurately.

Now that I knew the basics of dealing, it was time for me to find a job somewhere and start dealing real games.

One night, browsing the “gigs” section on Craigslist, I came across a post looking for poker dealers. It was a paid gig to deal a tournament for a bar poker league in Long Island, NY. I responded to the post and was hired to deal the event.

It was a typical bar poker league — a bunch of people who get together once a week at a particular bar to play some tournament poker and have some fun. They’re usually self-dealt and pretty agonizing to play in because of that fact. However, this bar league decided to pool some money together and hire a few dealers instead.

One of those dealers was a guy named Gary, who I met that night. He was an older guy, in his late 50’s, grey hair, really tan and thin, decently tall and looked like a crackhead. He spoke a mile-a-minute and constantly cracked jokes that I didn’t really find funny. He was a nice person, though, seemed goodhearted and we struck up a conversation during one of our breaks.

“You play cash? Here, take one of these,” as Gary hands me a business card with a large, black spade on it and a phone number printed below it, with the caption — “SPADES”.

“Yeah, I play cash, what’s this you handed me?”

“It’s a phone number to a poker club. It’s located in Long Island. We open everyday at 11am. $1/$2 no limit, tournaments too. If you wanna play, call or text the number and tell them Gary sent you. We met at the bar league tournament. By the way, you into men?”

He said all of that without a skipping a beat, in one breath, at the rate of about 90mph. I wasn’t sure that I heard him correctly.

“No problemo, kiddo. You play PLO at all?”

“I’ve played it before, but I’m not good at it. I don’t really know what I’m doing.”

“Well if ya feel like playin some PLO gimme a call good lookin, I play at The Warehouse. Good action, lotta fun. Take my number, name’s Gary.”

I took out my phone and saved Gary into my contacts. Sent him a text with my name in it. He lit up a cigarette and I listened to him talk as he smoked. He asked me if I had seen the movie Rounders, which of course, I had. He then gave me a brief history lesson.

“Ya know the Chesterfield in the movie is based on a real club that was in the city, right?”

“No, I didn’t know that actually. Is it still around?”

“Nope, shutdown years ago. Political bullsh*t. Can’t say I wasn’t happy about it though.”

“Gave the place I was workin’ for at the time more business. Put alotta money in my pocket. Good times at The Diamond Club.”

“Yep. Great cardroom. First one in the city to have dealers. Worked there for years until it closed. But, ya know, life goes on. Live here in Long Island now. Where you from?”

“I’m from here, but I lived in California for 10 years, I was born there.”

He clearly had no idea how young I was. Or maybe he did, who knows?

“Nah, no kids. Not married, just a girl. I’ve been with her for about 8 months.”

“Lucky lady. Good for you. She play cards?”

“Oh, no. I’ve tried to show her how to play before, but it ended up somehow turning into strip poker. She said she preferred that much more than playing with the chips. Speaking of which, we should probably head back inside and finish up this tournament.”

During the drive home from the bar, I took the business card Gary had given me out of my pocket. I felt like playing. The bar league pay was $80 + tips for the dealers, which ended up being around $200. Thankfully, they were very generous.

I had been wondering why a guy like Gary would ever deal an event like this one. He was a really, really good dealer. Without a doubt, he was a professional. But, he was there for one reason. He was recruiting.

Before I had met him during our break, I had seen him handing out business cards to every one of the bar league players. I didn’t make sense of what he was doing until he had handed me a card outside.

Now, I really wanted to check this place out. Spades. Given that I lived in Long Island and not Queens, where Fox’s Club was located, the thought of playing at a club that was local to me seemed very attractive. It was a really big inconvenience to drive all the way to Queens every time I wanted to play. It was especially tilting when I would have to drive all the way home after a losing session. I was getting better at the game, but still not yet a competent player.

I needed to play with some new players. I had only ever played live poker at Fox’s. Maybe I could learn something from a new game.

I take it out of my pocket, then click the button on the side to spring it open. It’s Gary.