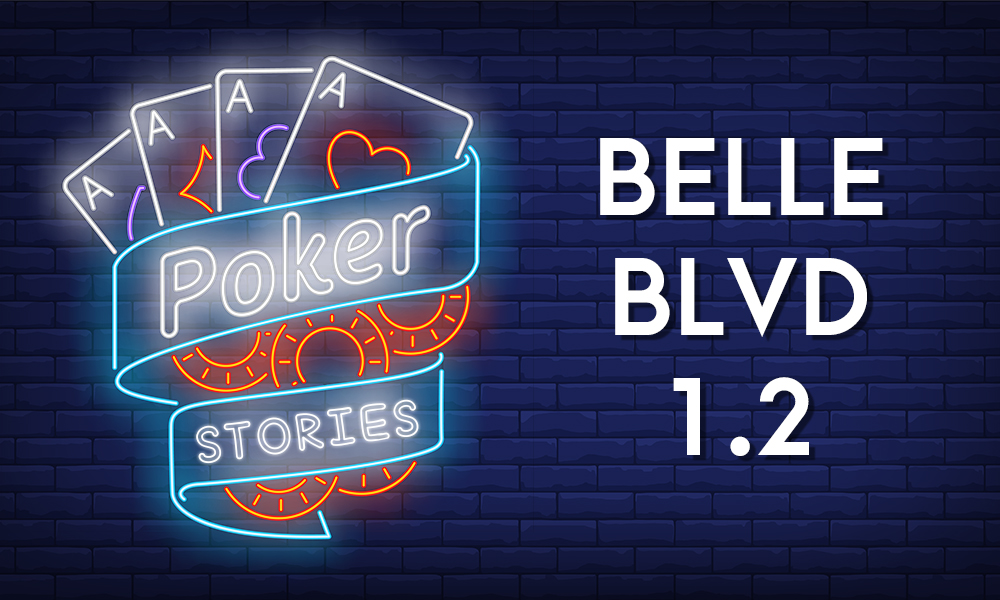 It was August of 2008, and I had just started my first semester of college at St. John’s University in Queens, NY. I was attending on a scholarship, but my family wasn’t wealthy — thankfully, I had locked up a dealing spot in Sal’s game on Bell Blvd, which ran three times per week. This meant that I wouldn’t have to take up a part time job making minimum wage.

I never realized it at the time, but most college students are broke and don’t really have much disposable income. This wasn’t at all the case for me, because Sal’s game turned out to be incredibly lucrative. I would make more money in one night than most students would make in an entire week. I didn’t have any bills to pay, in fact, I really didn’t have any financial responsibilities at all.

Joey had just extended me an invitation to play in a $50 rebuy sit and go, and I had confirmed my attendance with a promise of showing up early to play some beer pong. I wasn’t due to show up for another 8 hours or so — I had some time to kill, but I hadn’t made any friends yet other than my roommate Danny. He was in bed, but he was awake and on his laptop. I started to get hungry and wanted to go get lunch at the campus cafeteria.

“I could eat. You wanna go to the cafeteria?”

“Yeah. Is breakfast over? I forget what time they start serving lunch.”

I got ready for the day, then we made the walk over to the cafeteria. I actually enjoyed eating there. They had so many different options — various hot dishes, soups, a salad bar, every deli meat you can imagine, and a soda fountain, among other things.

Danny and I fill up our plates, then sit down at a free table. I send Joey a text, asking him if it’s okay if I bring my roommate. He says it isn’t a problem.

“You wanna go to a poker tournament tonight?”

“What, you mean like a real tournament at the club you deal for?”

“No, it’s at my friend’s frat house. I know him from high school. He’s graduating this year.”

“Well, Joey said to stop by early at around 8:30 PM if we wanted to meet some girls and play some beer pong.”

We finish eating and return to our dorm. I was pretty tired, I had only slept for several hours, so I decided to take a nap.

I woke up later on in the evening. Danny wasn’t in the room, so I left the dorm to grab dinner. He was still gone when I returned, so I sent him a text asking if he was definitely coming to the game with me. He said he was and that he’d be back shortly.

I pass some time by watching TV and double checking my class schedule for the following week. Suddenly, it was time to get going. Danny and I leave the dorm and head to my car. I drive over to the frat house and find a parking spot. We get out of my car and walk up to the door. I had sent Joey a text shortly before we had arrived, letting him know that we were almost there. He told me to just walk right in, the door was unlocked.

I open the door and immediately see Joey, he’s relaxing in a recliner and drinking a Coors Light. He’s not alone — a few other guys are watching TV, one is reading, and another is on a laptop. In the middle of the room are two dudes playing beer pong.

“Good to see you, man. Yeah, I’ll take one. This is my roommate, Danny.” — Joey and Danny shake hands.

“I’ll introduce you guys to everybody in a second. Let me show you around first.”

Joey gives us a tour of the house. The place is fucking disgusting.

The hardwood floors on the first level are filthy. They’re covered with dirt and are sticky from spilled beer. The downstairs bathrooms are both nasty, one didn’t even have toilet paper or soap. The kitchen was home to a sink full of unwashed dishes. The bedrooms upstairs were slightly less of a mess, but that isn’t saying much. However, the shared bathroom was atrocious. The mirror looked like it had never been cleaned, and there were hairs all over the floor and sink.

I began to wonder how anyone could live like this.

The basement was gigantic but unfinished — it had concrete flooring and cases of beer that were stacked almost 6 ft high. There were several tables set up for beer pong, and some of the cups still had beer in them. One table, however, was the designated poker table. It had chairs all around it and was covered with a blanket of green felt.

The three of us walk back upstairs, and Joey introduces Danny and me to his frat brothers. We exchange pleasantries and set up a couple more folding tables for beer pong. I wasn’t very good, I lost the first match. A few girls and several more guys show up to the house — we all hung out for about an hour. Suddenly, Joey addresses the entire room. It’s time to start playing some cards.

We all head down into the basement. Joey instructs everyone to sit down at the poker table and get their buy-in ready. Ten minutes go by, and we’re ready to go. He starts the clock and the first hand is dealt.

An orbit or two into the game, I have a realization. Excluding Joey and somewhat Danny, nobody really knew what they were doing — they were awful. Most of the table would limp in and then call any raise preflop. Nobody liked folding, but they sure did like to rebuy.

I blew through 3 buy-ins before I was eliminated. Danny managed to dust off four. I was hoping that there would be a cash game afterwards, but nobody wanted to play cash. Instead, I had a few more beers and hung out for a while. I thought that there may have been potential to recruit a few guys for the Bell Blvd game, however, only one guy, other than Joey, had shown interest. Still, I was content — he seemed genuinely intrigued about playing in an underground game. Even one new player would make a huge difference for me.

It was beginning to get late, and several of the guys had either left or gone upstairs to bed. I don’t remember who won the tournament, but neither me, Danny, or Joey cashed. The night was coming to an end, so I thanked Joey for for inviting us over and told him to definitely text me for the next game.

“I had fun man, thanks for inviting us over. Let me know about the next game, and send me a text if you wanna play some cash down on Bell Blvd.”

“Absolutely, bro. Thanks for coming. You and Danny are welcome to the house anytime. We’re having a house party next week, if you wanna come. We’re trying to get ahead of rush week.”

“Yeah, it’s when all of the fraternities on campus go hard at getting new pledges. Lots of parties and events for the freshmen.”

“Dude, I don’t know the first thing about fraternities.”

“Clearly. I’ll tell you all about my frat, if you’re interested. Most of the guys are cool, there are only a few who I don’t like. Have you thought about joining a frat?”

“Not at all. I don’t really understand the point. Maybe I’m missing something.”

“Stop by the University Center anytime before 5PM on Monday. Most of us will be there, I’ll introduce you to everyone.”

“I thought that everyone lived in this house. Didn’t I just meet everybody?”

“Noooo. You don’t have to live here if you’re in the frat, we just have a great price on rent, and I can’t complain about how many girls hang out around here.”

“I see, hmm… that’s interesting. I’ll give it some thought and stop by the UC on Monday.”

Danny and I leave the frat house and drive back to campus. During the ride back, he tells me that he got a girl’s number when we were hanging out upstairs. I don’t remember her name or what she looked like in particular, but I do remember that there wasn’t a single girl there who I would throw out of bed. This would go on to be a common occurrence for Danny — he was always dating someone, and he was friends with a ton of girls.

We eventually arrive at the campus parking lot and find a spot. We walk to the dorms and finally get back to our room. I felt like relaxing and decompressing, so I packed the bowl to my vaporizer with some dank weed and got stoned. Danny partook as well.

I went to bed that night thinking about the benefits of joining a frat. I didn’t really know much about them or what they had to offer, but I figured that I should at least hear what Joey had to say. I drifted off into a slumber and passed out.

Monday had arrived, and that meant I had to be at the Bell Blvd game at 6PM. I had a long day of classes ahead of me, and I wanted to hit the university gym before I left for work. I was more disciplined back then, in terms of staying active. I religiously exercised at least 4 days per week for over ten years, before getting injured.

At around 2PM, I received a text from Sal asking if I was definitely going to be at the game on time. I replied saying that I had already given him my word. He certainly liked my response — Sal was big on reliability and loyalty, and those were important qualities that he looked for in people that worked for him.

Later that day, I had finished all of my classes and stopped by the University Center to see Joey. He basically pitched me on the idea of joining his frat and introduced me to a bunch of the guys who don’t live at the frat house. He also introduced me to their sister sorority — the most compelling reason to join a frat. I met a ton of girls who were all older than me, and I found most of them to be very attractive. The idea of pledging became interesting.

It was time to leave for work, and I began to walk to my car. I had taken a drive the night before, and I had absolutely no luck at finding a parking spot on campus when I got back. Instead, I had parked on the street, which was a significantly longer distance away from the main entrance gate.

With about 30 minutes to spare, I arrived at the street corner where I had parked, but there was a sleight problem — my car was gone.